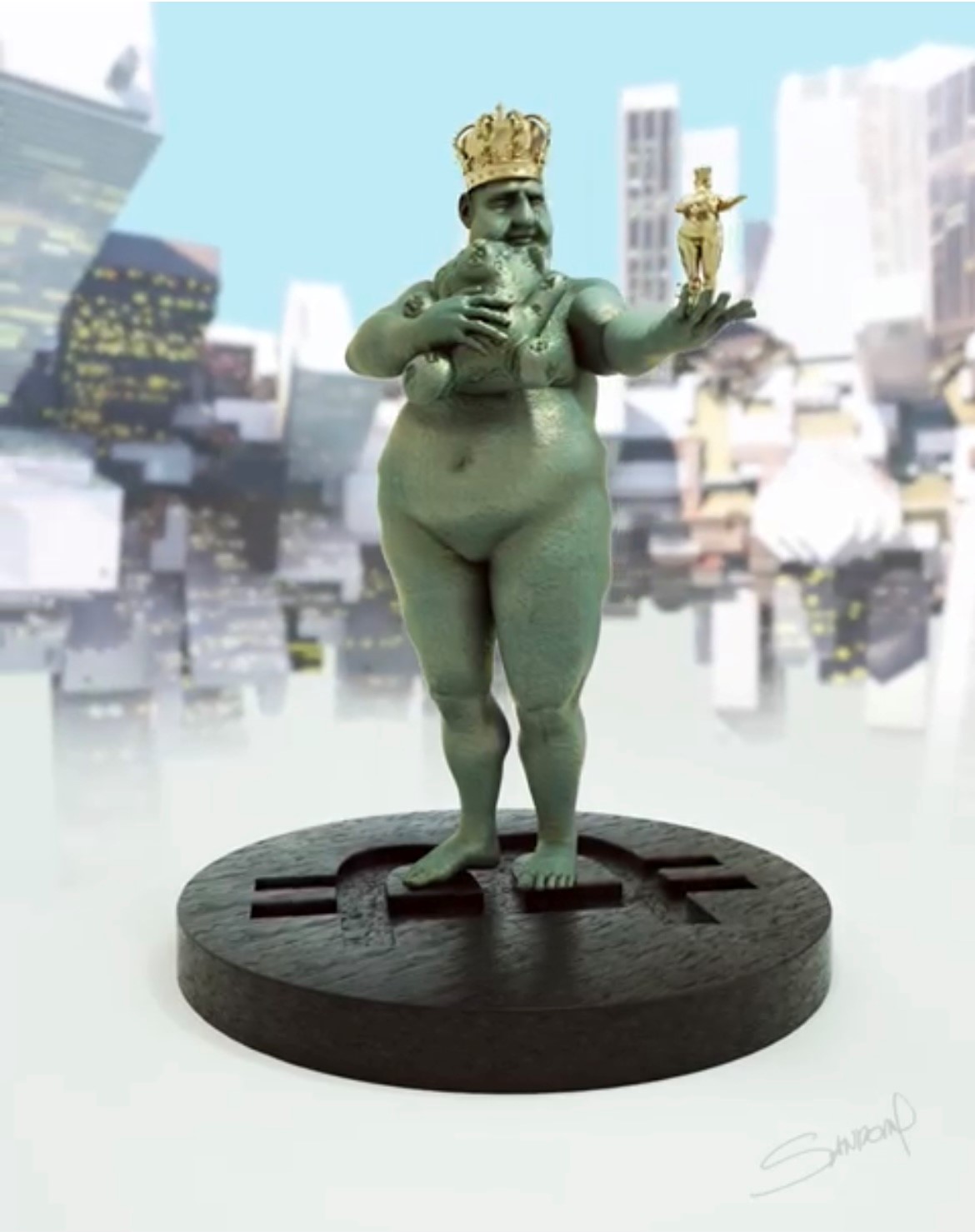 is to be auctioned as a virtual asset and/or coupled with a bronze/gold sculpture (height approx. 80cm)

This unique NFT will be auctioned between 17 – 21 January 2022 during the Davos WEF Week on WISe.ART, the only entrusted NFT marketplace for luxury goods, art and other high-end collectibles.

Responding to the needs of buyers and sellers of high-value goods, the WISe.Art platform is developing into a fully-fledged marketplace with its own digital currency, the ability to include curators and multipliers, white-labeling options and custom-made NFT design.

The NFT design of the WISe.Art platform ensures that besides an authenticated and signed version of the actual digital asset, an irreversible link to a physical object is set up, in addition to proof of ownership, provenance and a set of contracts describing future use and monetization streams, if relevant.

The NFT tokenization uses the WISeKey registered patent application, “System and Method for Providing Persistent Authenticatable NFT” in the USA. With this method, NFTs have increased in value and will hold its long-term value. https://www.wisekey.com/press/wisekey-files-patent-application-for-persistent-and-authenticatable-nfts/

NFTs and the platform are secured by WISeKey’s own security technology enabling the protection of physical objects as well as digital assets in a safe end-to-end process.

MisterBitcoin NFT celebrates the world of bitcoin and how it is now considered as an alternative to central bank-controlled fiat money.

Pedro Sandoval, a world-renowned artists born in Venezuela in 1966 and currently living in Spain. He is closely associated with the abstract neo-expressionist movement. He manifested his artistic skills from an early age, and he was awarded the Young Master of the World Award in the Japanese city of Osaka at only six years old. His outstanding craftsmanship led him to the Cristobal Rojas school, in his native Venezuela, where he received classical training. Pedro Sandoval is interested in the alliance between figuration and abstraction and has worked with internationally recognized mentors such as Oswaldo Vigas or Jesús Rafael Soto.

After settling in Spain in the 2000s, he travelled to Germany where he met the most renowned figures of German neo-expressionism such as Georg Baselitz, Sigmar Polke and Anselm Kiefer. He joined their movement which Wolfgang Becker described as the “New Savages”.

Currently, Pedro Sandoval focuses his research on both the new German avant-garde and the work of abstract American expressionists such as Hans Hofmann, Barnett Newman, Jackson Pollock or Cy Twombly. His works can be found in museums such as the Guggenheim in New York or in the contemporary art museums of Caracas and Boca Raton (Florida), as well as the collections of the White House, the Vatican Museums or the Kennedy’s.

Smart contracts and physical contracts can be included in the NFTs to describe the usage rights of the NFT buyer, including monetization of their collection. It also allows the original creator to potentially participate in future royalties. This option opens new funding opportunities for artists with large collections, as well as better appreciation for their work.

WISeID is a trusted identity service that enables access to the web and mobile applications with strong authentication techniques. WISeID supports online KYC onboarding, OTP and digital certificate login, and an innovative “hands-free” secure login based on QR-Codes which users can read using WISeID suite of mobile applications without even having to type any passwords.

Additional security services include digital signature services for documents. WISeID implements standards such as OpenID Connect and OAUTH2, that can be easily integrated by customers to enhance the security of their cloud applications. WISeID can also be combined with Microsoft Active Directory, facilitating integration with corporate applications.

About WISeKey:
WISeKey (NASDAQ: WKEY; SIX Swiss Exchange: WIHN) is a leading global cybersecurity company currently deploying large scale digital identity ecosystems for people and objects using Blockchain, AI and IoT respecting the Human as the Fulcrum of the Internet. WISeKey microprocessors secure the pervasive computing shaping today’s Internet of Everything. WISeKey IoT has an install base of over 1.5 billion microchips in virtually all IoT sectors (connected cars, smart cities, drones, agricultural sensors, anti-counterfeiting, smart lighting, servers, computers, mobile phones, crypto tokens etc.). WISeKey is uniquely positioned to be at the edge of IoT as our semiconductors produce a huge amount of Big Data that, when analyzed with Artificial Intelligence (AI), can help industrial applications to predict the failure of their equipment before it happens.

Our technology is Trusted by the OISTE/WISeKey’s Swiss based cryptographic Root of Trust (“RoT”) provides secure authentication and identification, in both physical and virtual environments, for the Internet of Things, Blockchain and Artificial Intelligence. The WISeKey RoT serves as a common trust anchor to ensure the integrity of online transactions among objects and between objects and people. For more information, visit www.wisekey.com.

This press release does not constitute an offer to sell, or a solicitation of an offer to buy, any securities, and it does not constitute an offering prospectus within the meaning of article 652a or article 1156 of the Swiss Code of Obligations or a listing prospectus within the meaning of the listing rules of the SIX Swiss Exchange. Investors must rely on their own evaluation of WISeKey and its securities, including the merits and risks involved. Nothing contained herein is, or shall be relied on as, a promise or representation as to the future performance of WISeKey.