This article is proudly sponsored by WePlay Holding

WePlay Esports held the finals of the WePlay Academy League Season Two on Nov. 14, which saw MOUZ NXT repeat as champions after a 2-0 win over Natus Vincere Junior. However, Na’Vi Junior didn’t go home empty-handed, as the team received a Runner-up Award thanks to the success of WePlay Collectibles and the event’s NFT collection.

In the two weeks leading up to Academy League S2 and during the event itself WePlay Collectibles, WePlay’s internal NFT project that aims to unite the esports community in new ways, launched a new line called Shooter: from A to Z. This collection of NFTs featured 26 unique tokens that used popular phrases from first-person shooter games in the theme of the alphabet.

Throughout its time at auction, Shooter: from A to Z sold out entirely and grossed 1 Ethereum (ETH), or the equivalent of around $4,533.

“WePlay Collectibles is a project that brings together two digital-native industries. We’re delighted that our efforts have paid off, and that we’ve managed to connect esports and the NFT market,” WePlay Holding chief communications officer and WePlay Collectibles lead Alena Dalskaya-Latosiewicz said. 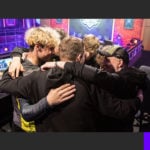 Half of all token sales went to Na’Vi Junior as part of the first crypto-powered runner-up prizing, along with the regular $20,000 they earned via the competition’s $100,000 traditional prize pool. The team also received a special Trophy NFT for their placement.

In adding this special Runner-up Award, WePlay wants to further promote tier-two scenes within esports, as events in those spaces tend to feature younger teams that are just starting their esports journeys. Having additional incentives to bring those players out to compete in events is something WePlay views as beneficial for players who fall short of their goals.

Moving forward, these initiatives from WePlay Collectibles will continue to be used in tandem with the company’s programming, whether that be individual collections launching to tie into events or running as their own operations.

“The NFT market is young but shows a lot of promise,” Dalskaya-Latosiewicz said. “Given that the NFT collection Shooter: from A to Z is sold out, we have managed to attract fans. Blockchain technology is here to stay for a long time, and WePlay Collectibles will keep implementing NFTs in esports step by step.”