Israeli company CryptoVerses sells NFT of Bible verse for $8,400 – The Times of Israel

An Israeli company says it has sold an NFT — or non-fungible token — encrypted with a Bible verse in Genesis for close to $8,500.

According to CryptoVerses, an Israeli project launched earlier this year by Yonatan Bendahan and Yuval Mey-Raz, the verse, Genesis 29:35 — which contains the first biblical reference to the word Jew, when Judah was born — was sold for 2.02 Ethereum, in a digital currency transaction equivalent to about $8,400.

The verse says: “She [Leah] conceived again, and when she gave birth to a son she said, ‘This time I will praise the Lord.’ So she named him Judah. Then she stopped having children.”

The company did not reveal details of the individual who purchased the NFT.

“The project symbolizes the global technological development over thousands of years,” said Bendahan, CryptoVerses’ co-founder. “First a biblical text was written on papyrus and then on parchment scrolls. In the 15th century, with the invention of printing, the printing of the Bible as a book began. With the invention of voice recording, audio Bible versions began to emerge. When the World Wide Web was launched in 1990, the Bible could be read over the Internet. Now we are in the Blockchain Age and it is an honor for us to be the first to encrypt the Bible verses on the blockchain and allow everyone to own a non-fungible Bible verse token.”

CryptoVerses is currently selling NFTs of verses from the first five books of the Bible, with potential buyers able to search via biblical stories. The company explains that purchasing such an NFT is “not ownership of the biblical content,” but rather like purchasing “a physical item that includes a Bible verse, like a medallion, where the purchaser becomes the owner of the medallion but not the owner of the verse written on it.” 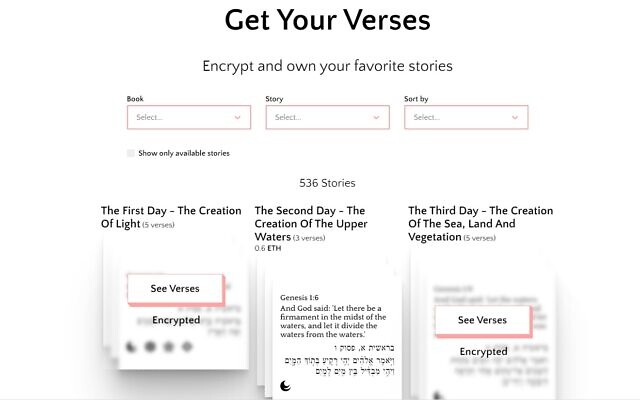 A screenshot showing the homepage of the Israeli company CryptoVerses. (Screenshot)

NFTs are effectively digital certificates of authenticity that can be attached to digital art or, in fact, pretty much anything else that comes in digital form — audio files, video clips, animated stickers, or this article you’re reading.

NFTs confirm an item’s ownership by recording the details on a digital ledger known as a blockchain, which is public and stored on computers across the internet, making it effectively impossible to lose or destroy.

The Associated Press contributed to this report.